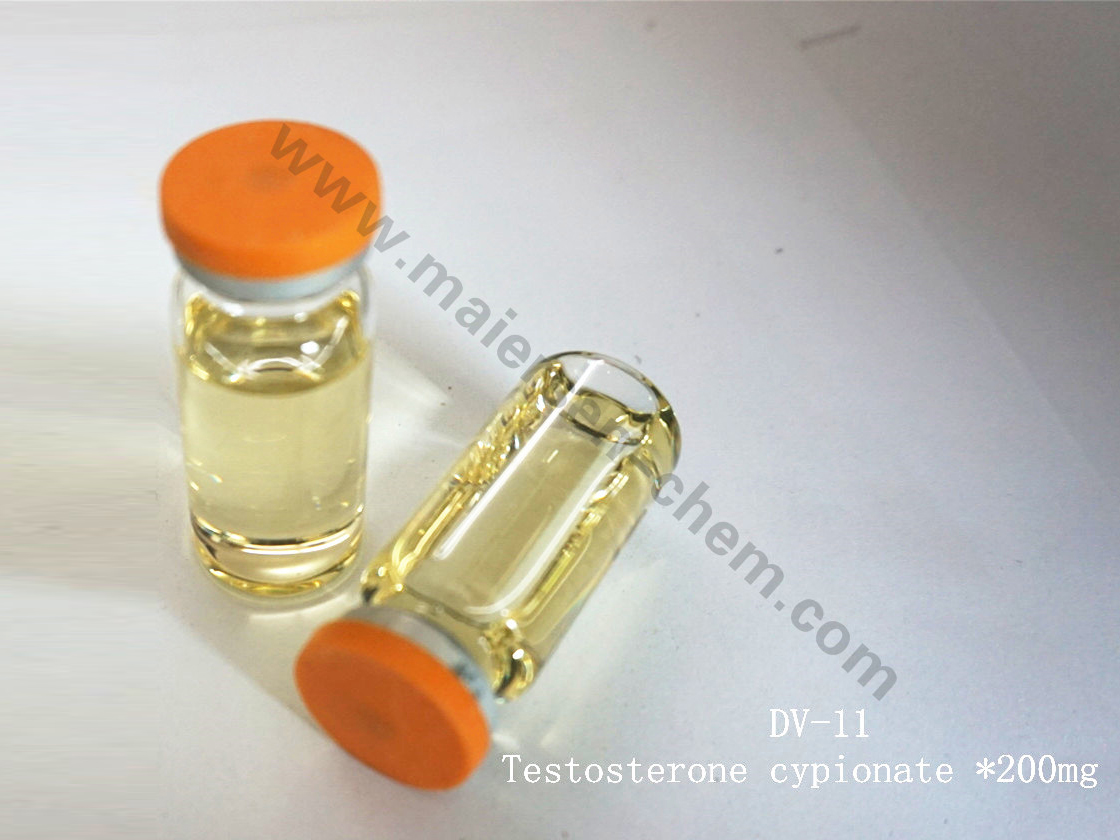 Testosterone cypionate is a long acting ester of testosterone which is increasingly difficult to find.Before the scheduling of anabolics in the U.S., this was the most common form of testosterone available to athletes. Cyp had gained a reputation as being slightly stronger than enanthate and became the testosterone of choice for many. Now that anabolics are controlled, this is an almost impossible find. In general, the only versions you'll find on the black market are Sten from Mexico, which contains 75mg cyp with 25 mg propionate along with some DHEA, and Testex from Leo in Spain which contains 250mg cypionate is a light resistant ampule. All versions of Upjohn and Steris in multi-dose vials should be looked at with extreme caution as they are very difficult to get on the black market. Counterfeits are quite easy to obtain. Real Steris products have the inking STAMPED into the box and the labels cannot be removed from the bottle. Any variation of that is definitely counterfeit. A running dosage of test cypionate is generally in the range of 200-600mg per week. When this was available for $20 per10ml bottle, many users would take a whopping 2000mg per week. This kind of dosage however, is unsafe, generally not needed and in today's day and age too costly.

American athletes have a long and fond relationship with Testosterone cypionate. While Testosterone enanthate is manufactured widely throughout the world, cypionate seems to be almost exclusively an American item. It is therefore not surprising that American athletes particularly favor this testosterone ester. But many claim this is not just a matter of simple pride, often swearing cypionate to be a superior product, providing a bit more of a "kick" than enanthate. At the same time it is said to produce a slightly higher level of water retention, but not enough for it to be easily discerned. Of course when we look at the situation objectively, we see these two steroids are really interchangeable, and cypionate is not at all superior. Both are long acting oil-based injectables, which will keep testosterone levels sufficiently elevated for approximately two weeks. Enanthate may be slightly better in terms of testosterone release, as this ester is one carbon atom lighter than cypionate (remember the ester is calculated in the steroids total milligram weight). The difference is so insignificant however that no one can rightly claim it to be noticeable (we are maybe talking a few milligrams per shot). Regardless, cypionate came to be the most popular testosterone ester on the U.S. black market for a very long time.

As with all testosterone injectables, one can expect a considerable gain in muscle mass and strength during a cycle. Since testosterone readliy converts to estrogen, the mass gained from this drug is likely to be accompanied by quite a bit of water retention. The resulting loss of definition of course makes cypionate a very poor choice for dieting or cutting phases. The excess level of estrogen brought about by this drug can also cause one to develop gynecomastia rather quickly. Should one notice an uncomfortable soreness, swelling or lump under the nipple, an ancillary drug like Nolvadex should be added immediately. This will minimize the effect of estrogen greatly, making the steroid much more tolerable to use. The powerful anti-aromatases Arimidex, Femara, or Aromasin are yet a better choice. Those who have a known sensitivity to estrogen may find it more beneficial to use ancillary drugs like Nolvadex and Proviron from the onset of the cycle, in order to prevent estrogen related side effects before they become apparent.

Since testosterone is the primary male androgen, we should also expect to see pronounced androgenic side effects with this drug. Much intensity is related to the rate in which the body converts testosterone into dihydrotestosterone (DHT). This, as you know, is the devious metabolite responsible for the high prominence of androgenic side effects associated with testosterone use. This includes the development of oily skin, acne, body/facial hair growth and male pattern balding. Those worried that they may have a genetic predisposition toward male pattern baldness may wish to avoid testosterone altogether. Others opt to add the ancillary drug Proscar/Propecia, that prevents the conversion of testosterone to dihydrotestosterone. This can greatly reduce the chance for running into a hair loss problem, and will probably lower the intensity of other androgenic side effects. Although active in the body for much longer time, cypionate is injected on a weekly or bi-weekly basis in order to maintain stable blood levels. At a dosage of 250mg to 800mg per week we should certainly see dramatic results. It is interesting to note that while a large number of other steroidal compounds have been made available since testosterone injectables, they are still considered to be the dominant bulking agents among bodybuilders. There is little argument that these are among the most powerful mass drugs. When taking dosages above 800-1000mg per week there is little doubt that water retention will come to be the primary gain, far outweighing the new mass accumulation. The practice of "megadosing" is therefore inefficient, especially when we take into account the typical high cost of steroids today.

It is also important to remember that the use of an injectable testosterone will quickly suppress endogenous testosterone production. It is therefore mandatory to complete a proper post cycle therapy, constisting of HCG and Clomid or Nolvadex at the conclusion of a cycle. This should help the user avoid a strong "crash" due to hormonal imbalance, which can strip away much of the new muscle mass and strength. This is no doubt the reason why many athletes claim to be very disappointed with the final result of steroid use, as there is often only a slight permanent gain if anabolics are discontinued incorrectly. Of course we cannot expect to retain every pound of new bodyweight after a cycle. This is especially true whenever we are withdrawing a strong (aromatizing) androgen like testosterone, as a considerable drop in weight (and strength) is to be expected as retained water is excreted. This should not be of much concern; instead the user should focus on ancillary drug therapy so as to preserve the solid mass underneath. Another way athletes have found to lessen the "crash", is to first replace the testosterone with a milder anabolic like Deca-Durabolin. This steroid is administered alone, at a typical dosage (200-400mg per week), for the following month or two. In this "stepping down" procedure the user is attempting to turn the watery bulk of a strong testosterone into the more solid muscularity we see with nandrolone preparations. In many instances this practice proves to be very effective. Of course we must remember to still administer ancillary drugs at the conclusion, as endogenous testosterone production will not be rebounding during the Deca therapy.