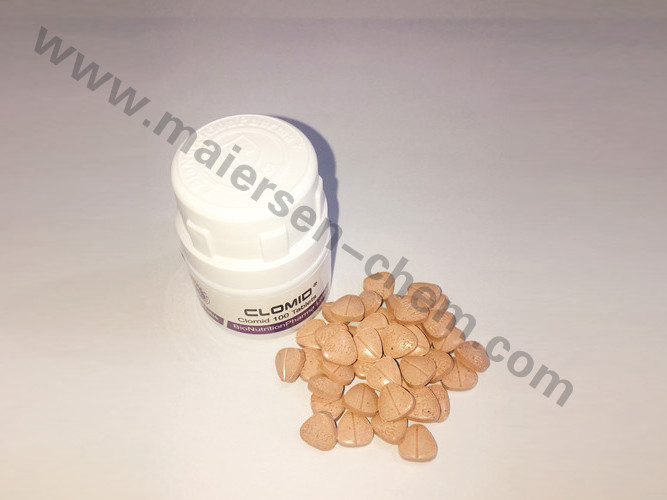 Clomid is the commonly referenced brand name for the drug clomiphene citrate. It is not an anabolic steroid, but a prescription drug generally prescribed to women as a fertility aid. This is due to the fact that clomiphene citrate shows a pronounced ability to stimulate ovulation. This is accomplished by blocking/minimizing the effects of estrogen in the body. To be more specific Clomid is chemically a synthetic estrogen with both agonist/antagonist properties, and is very similar in structure and action to Nolvadex. In certain target tissues it can block the ability of estrogen to bind with its corresponding receptor. Its clinical use is therefore to oppose the negative feedback of estrogens on the hypothalamic-pituitary-ovarian axis, which enhances the release of LH and FSH. This of course can help to induce ovulation.

It has already been covered that Toremifene is a SERM, and serves to block Estrogen at various receptor sites in certain tissues within the body (breast tissue in particular). As a layman explanation, Toremifene pretends to be a ‘fake’ Estrogen that occupies Estrogen receptors within breast tissue. With these receptors occupied by Toremifene, real Estrogen cannot perform their jobs there. Toremifene does not reduce total blood plasma levels of Estrogen. In addition to being antagonistic to Estrogen receptors in breast tissue, it is also antagonistic to Estrogen at the hypothalamus gland (this essentially ‘tricks’ the hypothalamus into thinking there is little or no circulating Estrogen levels in the body, causing it to increase its manufacture of Testosterone so that it can utilize aromatization to restore these levels.

Toremifene is also agonistic to Estrogen receptors in other tissues in the body (within the liver in particular). This means that whileToremifene will act as an anti-estrogen in breast tissue and the hypothalamus, it will act as an Estrogen within the liver. This can have beneficial impacts especially during an anabolic steroid cycle, such as improving and shifting cholesterol levels into a more favorable range.